No Comments on Institutional Craze in Bitcoin Continues—Grayscale Raises $217 million in 1 WeekPosted in Digital currency By coinofferings.netPosted on August 16, 2020August 16, 2020

Grayscale, the investment firm behind the Grayscale Bitcoin Trust, raised $217 million in a single week. It was the company’s largest fundraising week ever, hinting at rapidly-increasing institutional demand.

“Thrilled to share that Grayscale had our largest fundraising week EVER…$217 million invested into the Grayscale funds. Guess you liked the commercial!”

Institutions are paying attention to Bitcoin

Various metrics suggest that the inflow of capital from institutions into Bitcoin is continuously increasing.

The assets under management (AUM) of the Grayscale Bitcoin Trust is hovering at $3.55 billion. The company recorded $1.4 billion in inflow in the first half of 2020, mainly driven by institutions.

Earlier this week, a billion-dollar public company MicroSolutions purchased more than $250 million worth of Bitcoin as the firm’s primary treasury asset. Prior to that, Grayscale also bought 14,422 BTC, worth $170 million.

Large-scale bulk purchases of Bitcoin among institutions are increasing, and institutional products’ demand is rising in tandem.

The growing capital from institutions hitting the Bitcoin market suggests that the broader financial industry is beginning to consider BTC as a store of value.

Correlation with gold further boosts the store of value narrative

According to cryptocurrency market data provider Skew, the correlation between Bitcoin and gold is reaching all-time highs. The company said: 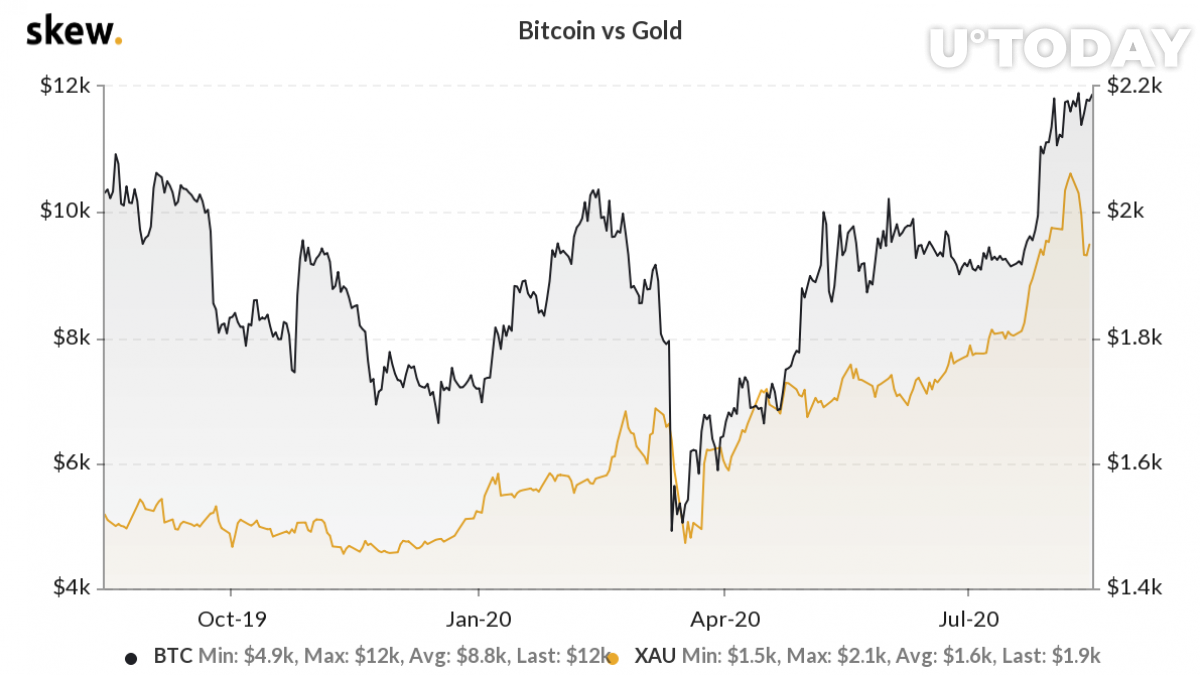 The correlation between Bitcoin and gold. Source: Skew

The correlation between Bitcoin and gold, especially during a time when prominent investors, like Berkshire Hathaway’s Warren Buffett, are obtaining exposure to gold.

Investors and strategists say Buffett’s entrance in to the gold market could eventually catalyze Bitcoin. Gabor Gurbacs, a director at VanEck, said:

The confluence of bitcoin and gold correlation, rising capital inflow from institutions, and the growing demand for gold are seemingly making Bitcoin more compelling to institutions.