No Comments on Tether Recovers 1,000,000 USDT for User Who Sent It to Wrong DeFi Address, Here’s What HappenedPosted in Digital currency By coinofferings.netPosted on September 13, 2020September 13, 2020

Tether CTO Paolo Ardoino has taken to Twitter to announce that Tether has recovered and returned 1,000,000 USDT to a user who mistakenly sent it to a wrong DeFi address and thought that the money had been lost forever.

The centralized finance (CeFi) platform quickly responded and did its best to help.

Tweets about an anonymous user (who proved to be a group of traders from China) going under the name Bill on Twitter losing his one million USDT emerged on September 8.

On that day, data appeared that they had sent the money to the Swerve token contract by mistake and was unable to recover it.

“We were just a group of otc player from China, accidently copy and paste the swerve contract address”

As a reminder, decentralized finance apps are different from centralized ones in the way that they cannot control user’s crypto in any way, both negative and positive – e.g. they can freeze your account if you are performing illegal operations or help recover your assets if something goes wrong.

This is exactly what happened in the case with the users who lost their 1 million USDT. Tether was able to recover this gargantuan amount since it is a CeFi (centralized finance) platform.

Paolo Ardoino responded the cry for help from the unlucky traders and said that it may take Tether up to a couple of weeks maximum to solve the issue. 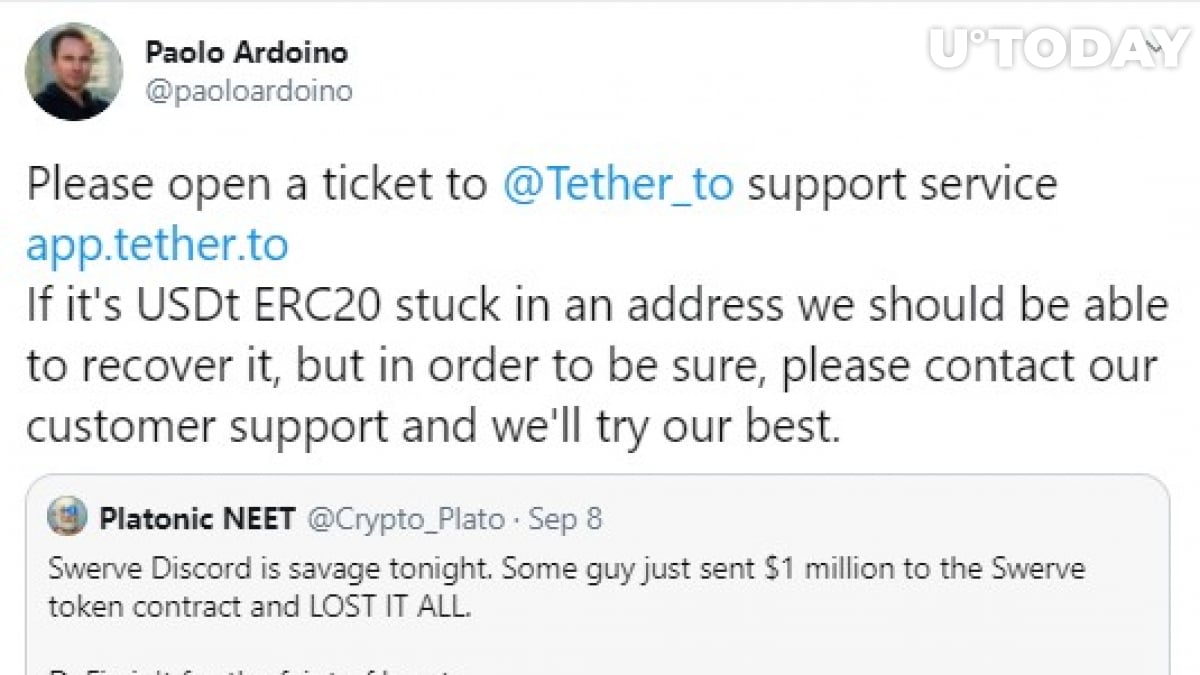 He mentioned that there were good chances the company could recover their money since it was ERC20-based USDT – the most popular USDT platform after Omni so far.

The problem was solved and the traders received their funds back, thanking the Tether support team and Paolo Ardoino in particular for the help.

Ardoino warned crypto users (yield-farmers mostly) that if they want to use DeFi tools they can do it at their own risk but if they want to get their money back if something goes wrong, they’d better make sure they use USDT. 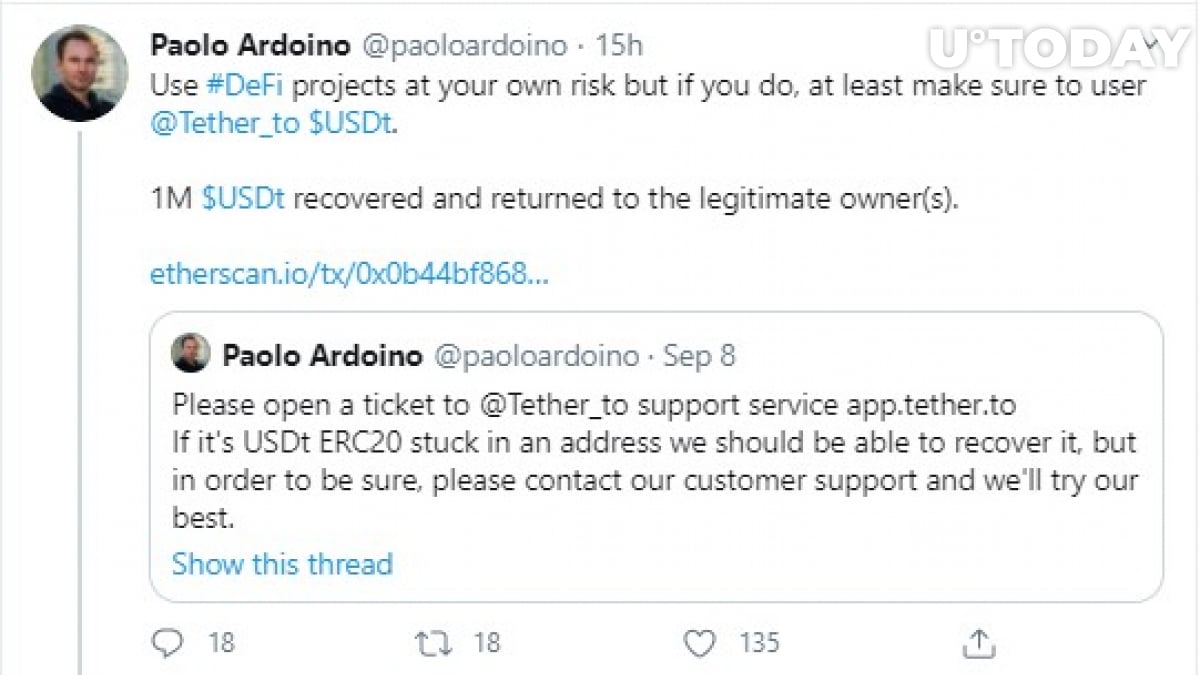 Here’s how Tether managed to do it

Blockstream CSO Samson Mow assumed that the user merely burnt the lost million USDT, provided a proof to Tether and the company then reissued the money.

However, Paolo Ardoino responded that it would be impossible to burn USDT on a specific address on the Liquid Network.

Here’s how he explained the mechanism in this particular case:

“The only solution would be requiring, for each transfer, an additional signature provided by a Tether watchtower. Such system would allow Tether to “freeze” funds. But burns of tokens on specific addresses are not possible.” 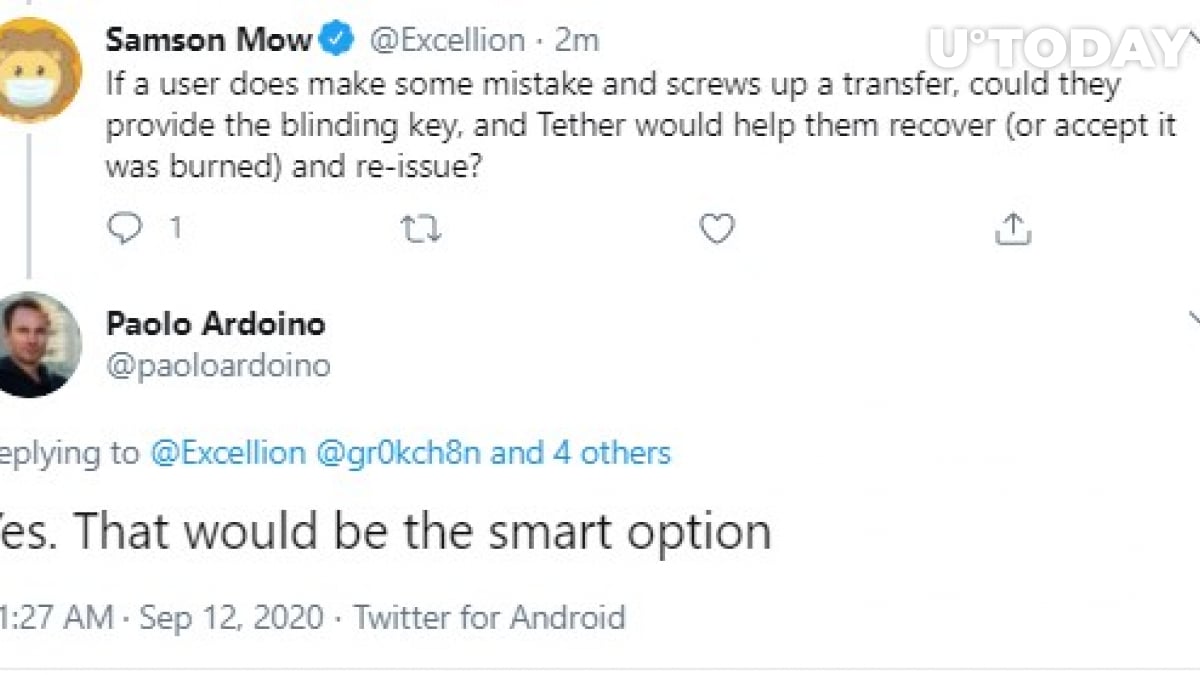 Tether Recovers 1,000,000 USDT for User Who Sent It to Wrong DeFi Address, Here’s What Happened